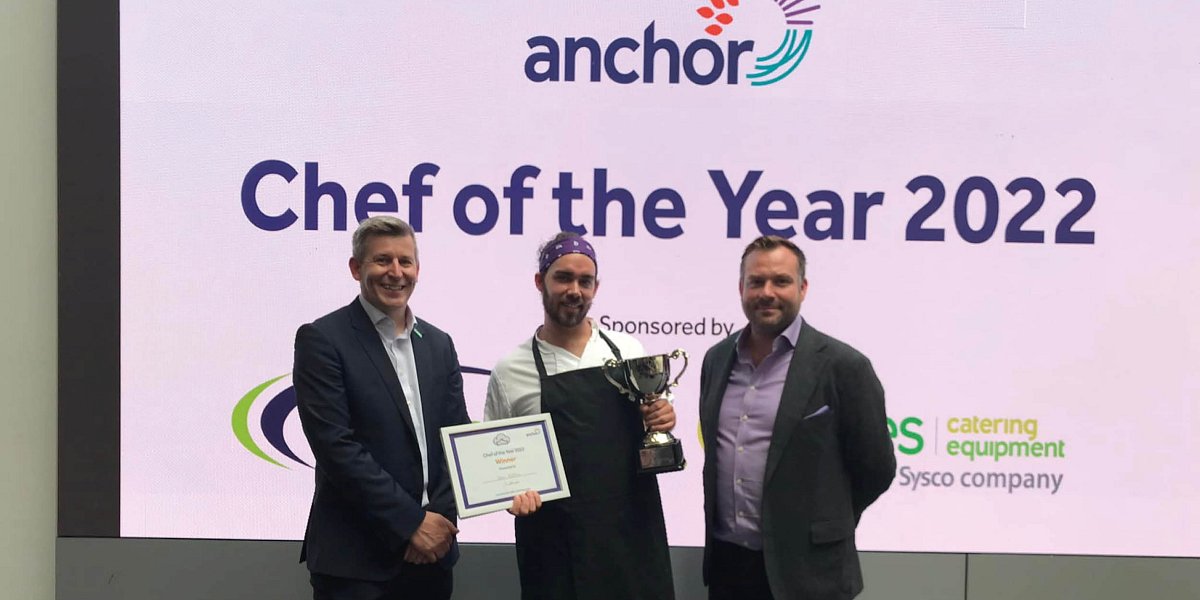 Anchor crowns its Chef of the Year

Care provider Anchor has announced the winner of its Chef of the Year Award.

A chef at a care home on the edge of London has won the Anchor Chef of the Year Award at the final in Leeds.

Sam Mellish, chef at Moore Place care home in Esher, went up against chefs from all 114 care homes run by Anchor.

Entrants in the competition submitted a three-course recipe (main, dessert and snack), with the best entrant from each region picked by managers in those areas. The regional finalists then had their submissions voted for by Anchor colleagues across the country, who picked the four most appetising menus.

They then came together to cook their recipes at Leeds Community College on Tuesday 5th July, with the judging panel including Anchor's managing director of care services Rob Martin, catering manager Noel Finnegan and Verity Sims, wniner of last year's Chef of the Year competition.

Sam was crowned the official winner later that day, with his menu of chicken wrapped in bacon and stuffed with cheese and sausages, summer pudding with clotted cream and a chocolate and red wine cake served with mascarpone ice cream combined the perfect balance of traditional comfort and culinary excellence.

Martin, who presented Sam with his award, said: "A huge well done to Sam. This year's competition was fierce, especially with our first in-person final for a while. So, it says a lot about Sam's menu and his skills that he was able to deliver such an excellent set of dishes against the clock and against so many other great chefs. I can say from experience that his summer pudding was especially delicious.

"At Anchor, we pride ourselves on colleagues' dedication. Excellent quality home-cooked food is central to ensuring residents have a positive experience in all Anchor care homes, and I'm sure residents at Anchor's Moore Place will be celebrating along with Sam."

After his win, Mellish said: "I still can't quite believe it! To make the final four was incredible but I never thought I’d win. I wanted to make a menu that was healthy but also tasty. So, when I entered the Chef of the Year competition, I had a good chat with our residents about what they really enjoyed and here we are.

“I really wanted to create a menu that our residents would love. They were so helpful and told me some wonderful stories about their favourite dishes, so maybe they’re the ones who should be getting the credit!"

Care group crowns its chef of the year